THE CIRCLE OF STAFFORD (WEEK 15)

Here we are, the Week before the Championship. For those of you who have made it this far you now have an advantage that could carry you further. What do I mean? I mean you have Matt Stafford on Monday Night Football against the New Orleans Saints. The game that is easily the Super Bowl of the BEAST DOME NATION. We will be doing another live Periscope for the action, I know those who were able to attend for the disappointing Saturday Night Football Game still enjoyed me asking for Hearts to uplift our players. Regardless. Download Periscope Follow @Muntradamus and enjoy the action. We will do a Periscope for the Raiders vs. Packers game this evening.

Now that we have veered completely off topic, here are the Standings for TEAM BEAST DOME. 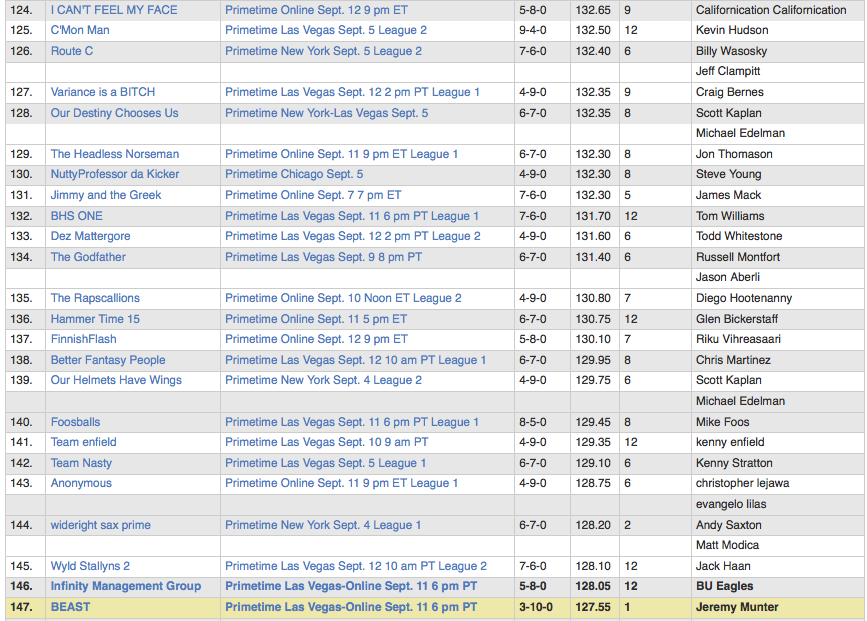 There are 356 Teams, and 60 Points is the difference between me and 1st place. I can thank my middle of the Pack Standings to another player who will make the all BEAST DOME Team in Doug Baldwin.

Baldwin is a Top 10 WR in non PPR leagues and he has taken off these last three game with 8 Total Touchdowns. He has 10 for the season, and who knows, he could finish with 13 the way he is playing right now. Do I dare say 15? 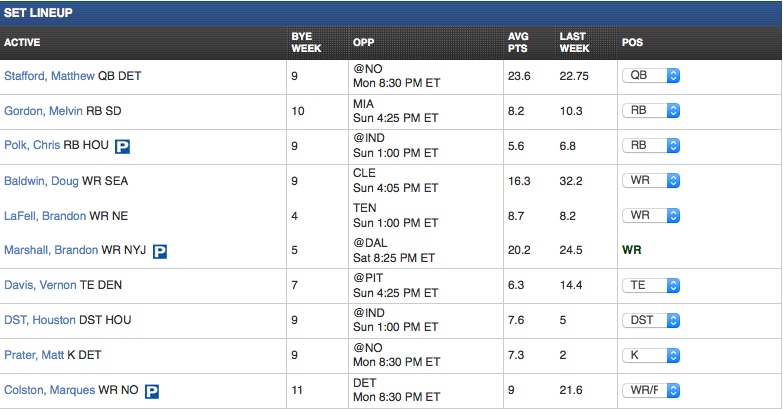 Could have really used those 21 Points in my lineup last week. I originally had him in when Brandin Cooks suffered a concussion during practice and his status was in Doubt, then they said Cooks would play. Which resulted with me playing it safe and starting Alfred Blue, who did not touch the ball.

This week Colston has a good shot to continue his success as Drew Brees is always a BEAST when he is at Home. The Lions Defense will have a lot of trouble slowing Brees down, which should lead to Marques Colston being productive. I would love the 2 Touchdowns again, but Lightning usually does not strike twice.

Once again I was scared of the concussion and ‘Vern After Reading’ likely not playing in Week 14. What do you know, he puts up his best game in a Broncos Jersey with 7 Receptions for 79 Yards. If I would have played Vern and Colston last week, I would find myself in 10th Place.

Vernon should be busy today against the Steelers who are really not the same D.ST unit since losing the Hair aka Troy Polomalu.

Still zero TD’s this season, but Melvin continues to see 10+ Carries a game with no questions asked. He should continue that trend against a very weak Miami defense, this could be the week he finally gets in. I am not crossing my fingers, who am I kidding that is all you can do with Melvin Gordon these days.

Too many injuries as I am using a glue stick to have a full lineup to close out the season. Let us see if I can close the gap.