HOW THE DRAFT WAS ONE

The time is here. The time for everyone to gather around and watch the most dramatic story of a Fantasy Football Team. No we have not seen an NFFC Championship in the Short 2 Years they have sponsored me with a team. No we have not even came close in the process.

2014 we saw RGIII throw my first 2 Weeks in Flames, then Fitzmagic had to come in and play doctor with the Texans. Even with the great picks in Arian Foster/Mike Evans/Marshawn Lynch, Team BEAST DOME failed to make the playoffs.

2015 it was the Horror Film, Silence of the Graham. The True story of how a player could be one of the most talented Tight Ends in the league, then become nothing more than a blocker.

Instead of going through the entire Roster for 2016. We are going to tell this story Terantino style.

HOW THE DRAFT WAS ONE

If I had to describe the Draft Strategy in 5 words or less.

“IN STAFF WE TRUST PERIOD.”

Over 90% of BEAST DOME PRESEASON BEAST members selected Stafford. 100% of them will start Staff Week 1. While Stafford/Sanu/Golden Tate/Adrian Peterson have been being hyped for the last month +. Let us now take a look at my spotlight player of the week.

We Must Protect This Forte.

Never have I seen a superstar goto a better team after a very strong season, then lose value. Rule #1 of Fantasy Football, don’t listen to Beat Reporters. All they do is Hype stories. and these people know far less than you think. The entire city of New York is sold that Bilal Powell and Matt Forte are on an even playing field and it will be a full RBBC.

I was more worried about Khiry Robinson looking vintage off of ACL Surgery than Bilal Powell being anything more than a 3rd and Long threat.

With that being said. Week 1 is a very tough matchup for Forte more or less because of the style of the Bengals. Jets offense did not look that crisp this preseason and the Bengals are in midseason form. I do not expect a blowout by any mean, but I can see the Jets offense going 3 and Out more than his Fantasy Owners will want. I would be surprised if the Jets score more than 2 TDs in this game, I hope Forte gets one of them.

If you own Brandon Marshall and Matt Forte like a lot of BEAST DOME PRESEASON BEAST members do. You have to start the duo with confidence. While this is a tough matchup for both Forte and Marshall, all you need is one of them to find the endzone. If Forte does well today, he is matchup Proof the rest of the way. 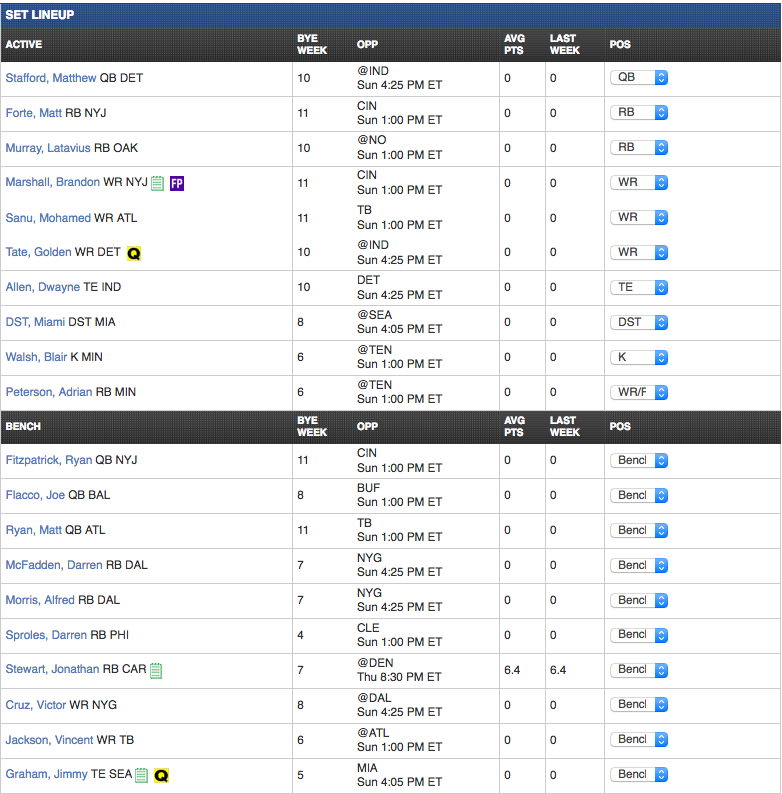