JOE BURROW IS A MANIAC

Joe Burrow was the #1 pick of the NFL Draft and immediately everyone feels the culture in Bengals town is going to be a winning one. People want to blame Andy Dalton for the last 9 years as the Bengals made it no further than the 1st round in all that time. Things actually started great for Dalton as he took the Bengals to the playoffs four years in a row from his Rookie season on. However since 2016, the Bengals record under Dalton is 20-35-1. Obviously it was time to change things up as Dalton is now 32 years old and while many will say his best days are behind him, he does make for an ELITE backup QB if he has to be thrown into the fire. Better than what the Patriots have in Stidham as a starter.

Moving on it is Joe’s team. A QB who reminds me a bit of Drew Brees, but also a QB where it is hard to judge if he is the real deal. How can I say such a thing? Just look at every Joe Burrow highlight from his mixtapes. He always has all day in the pocket, and his WRs are always wide open. Sure Burrow made some amazing throws to WRs with one on one coverage, but that does not fly very frequently in the NFL. Defenses take advantage of the smallest mistakes, and to think Burrow is going to have all day to scan the field is a completely different picture to paint.

Before I go further, I am not saying Burrow is a BUST or a BEAST, I just say there is not enough evidence to prove he is the real deal at this point and the College game is far different than the NFL game.

What Burrow has working for him is he has one of the greatest WRs in the game today in AJ Green. Green made Andy Dalton the player he is, and sitting out all of last season is probably a blessing for AJ’s health. He will be an extraordinary piece of the puzzle in whether or not Burrow is the real deal. You also have Joe Mixon who is arguably one of the most underrated RBs in the game today. Put Joe Mixon on the Chiefs and you have yourself a 20+ TD candidate. Tyler Boyd is great in the slot, and Tee Higgins looks to be a good WR2 who can do good things on the outside. Higgins is not Mike Evans, but he is not Ted Ginn. Somewhere in between is the early analysis.

So yes, Burrow has the weapons, he has the size, he has enough speed. The real question is, how will he do in the NFL. The first thing I want to look at with Joe is his Offensive Line. 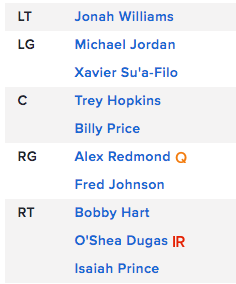 Outside of Trey Hopkins, this Offensive Line is horrible. Unless Michael Jordan turns into the Michael Jordan from the NBA, this team is going to be giving up sacks and having little room to run the Football. Bobby Hart is one of the worst tackles in the game and Jonah Williams missed all of last season with a shoulder injury. If Burrow has to rush his decisions because his tackles cannot block athletic freaks off the edge. Burrow will be dancing like a maniac all season long. You knew it was all going to tie together ;)

FOR ALL THOSE TOO YOUNG TO GET THE REFERENCE

Now the real question I wanted to tackle, because the Bengals do not have one.

Was it Andy Dalton’s fault the Bengals have not been a playoff team since 2014?

The short answer is no. The Bengals defense stayed the same from 2011-present more or less. Geno Atkins and Carlos Dunlap are the two remaining dinosaurs from the group. What happened is the defense got old and predictable, Vontaze became a criminal on the field. while the secondary which had some good talent turned into average talent after everyone learned how to beat them. The safety position was never truly secured and it was really all on Andy Dalton to lead this team to victory. Flash forward to 2020, and it is the exact same situation except this is the Bengals worst secondary to date as well as Lineback core. Blowing money on Trey Waynes who is way too small and can only semi-cover slot WRs with the help of Future Hall of Fame Safety Harrison Smith watch over his back. They would have been better off blowing that money on Trey Songz doing a live performance at halftime of every game.

FOR ALL THOSE TOO OLD TO GET THE REFERENCE

So is Burrow going to turn this Bengals team into a winning one? Probably not. The NFL schedule has not been released so it is too early to say. Predicting the situation on the last day of April I would say the season will look like this.

Burrow short completion. Mixon short run. Burrow has to make magic happen on 3rd down with lots of pressure. Bengals punt, defense can’t get off the field as the other offense scores easily. Burrow has to come back, defense plays hungrier, Burrow cannot take all the hits and looks sloppy. Bengals Punt more, give up more points, and unless Burrow turns into a Drew Brees circa Saints, he will likely look a lot closer to Drew Brees circa Chargers.

I am also not a believer in Head Coach Zac Taylor. Watching the Bengals run their offense last season I have never seen more 5 yard and Out patterns in my life. Horrible play calling and zero confidence. Mix everything in with a Rookie QB, nobody should get too excited. Bengals theme song will be bottoms up for all the time they will be chugging their drinks to fight the pain of more losing seasons.

Of course, as always, I wish the Bengals and everyone in that organization the best. Not looking to ride my money on it and definitely will not have Burrow anywhere near the Draft Strategy.