IF I GO CRAZY WILL YOU STILL CALL ME SUPER CAM?

Fantasy Football Season, feels around the corner even though we still have to potentially finish NBA season and jump start MLB season. With that being said, I wanted to put out a Fantasy Football article since it has been a while. It is too early to start putting out players I like or anything of that nature. We still have a lot of Key Free Agents remaining, the NFL Draft, and the release of the NFL schedule.

With that I am not going to give you an opinion piece on.

I have been to one NFL game in my life, it was 2018 when the Rams hosted the Panthers. It did not take more than 4 seconds to find Cam warming up, and his swagger can be felt around the entire Coliseum. I am sure that is the case no matter where he is. The problem with Cam after his MVP season back in 2015. Injuries. His throws were off, he could not break tackles like he once did. Cam Newton was taking a beating and went from the league’s most popular player, to a QB who was on the wrong end of bad hits and misfiring to WRs all game long.

You can blame the lack of talent, outside of Steve Smith Sr., Cam Newton has had nothing more than Greg Olsen in his career. Kelvin Benjamin, DJ Moore, Ted Ginn, Brandon Lafell. Is a list of Rookie Cards you can use as toilet paper if you ran out during this Pandemic.

I blame the injuries as he never has looked himself after his 35 passing TD MVP season. Cam is turning 31 years old before the season starts, he is obviously in amazing shape if you have not seen his Instagram. Literally every post is Cam shirtless. Also with some Alien Text Font he uses pretending to be a misspoken sweet 16 influencer. 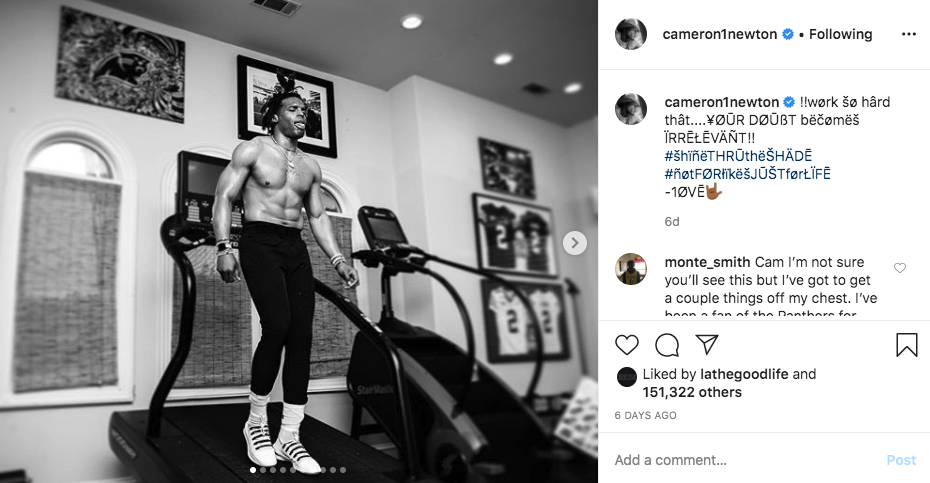 Not sure what the Panthers are thinking letting Cam Newton walk, especially for Teddy Bridgewater who really did not look that great with the Saints offense last season. If it was not for Mike Thomas being an absolute BEAST, and an easy Home Dome matchup against the Bucs. Bridgewater was hardly a factor in keeping the Saints competitive.

Cam Newton is now angry and he wants revenge. First we have to make sure, is he healthy?

I know Cam is turning 31 years old and looks to be in amazing shape as photo’d above. However a foot surgery injury for a QB that needs his rushing skills to be a viable QB, not something that has me in love with. His throwing accuracy is a whole other issue to do with, Josh Allen may be a more accurate QB at this point. Which says a lot.

Where will Cam Land?

A lot of options.

Las Vegas would be the most entertaining of them all. Derek Carr is not going to bring the Raiders a playoff season for the rest of his career, you can book that. Write off Carr’s contract as a Tax donation or find a way for Bill O’Brien to take it.

Los Angeles Chargers is where everyone expects him to land, no reason to have Tyrod Taylor at QB when you can go Cam Newton. However if he lands in LA, that is a ton of pressure and even though Cam will rise to the challenge because he is a boss. It also means he will be taking big hits and trying to make big plays, play after play. More of a Daily Fantasy QB, than a QB that will be part of the Draft Strategy. Fun to watch.

However the best option if I am Cam Newton and I want to get back into the good graces of the NFL and demand MGM or WYNN money after my contract is done in New England.

I goto the Patriots and take Tom Brady’s place. The Patriots are built to run the Football and throw the ball quick with the occasional deep shot. Most important, the Patriots are built to win the AFC East or at least compete for a top spot guaranteed with little resistance. You have a coach that will have you playing laser focused, you have a fan base that backs you like you are the next coming of Jesus. The Patriots would turn into Auburn Cam Newton Football, making it Cam’s team. Cam also plays better in bad outdoor weather, and he will get plenty of that being in New England and the AFC East. Does not hurt that Cam would have a majority of the same line that protected the 42 Year Old Brady.

With all this being said. It is speculation as we have no idea where Cam will land. There is also Jameis Winston in NFL Free Agency who honestly despite all the INTs, might be in the same ball park as Cam Newton when you consider he is younger and cheaper.

All we know is that the NFL Season is looking more and more guaranteed and MLB season appears to have a glimmer of hope.

LOVE YOU ALL BEAST DOME NATION!