DRIVING YOUR CARR INTO A WALL (WEEK 4)

After winning the #1 Expert at the QB Position back-2-back Weeks. Along with a seat in the DraftKings Championship and the #1 overall Expert for Week 2. I will navigate you better than Google Maps and tell you how to handle that sleek Sexy Sports Carr.

The BEAST DOME Legend Derek Carr, Nobody ranked Carr or the Raiders offense with any love back in 2015 when Crabtree joined the squad, besides myself and the BEAST DOME NATION.

While there is no doubting Derek Carr as a talent, the only way the Raiders will be able to win this game is by establishing a strong running threat. That does not come automatic against arguably the best Run D in the NFL. Just ask Zeke Elliot or LeSean McCoy how tough they are. The Bronocs bring a lot of heat forcing Derek Carr to throw faster than he wants to in what will be nearly body on body coverage with his WRs all day. Michael Crabtree is out which means Cooper will see too much coverage for him to handle.

If Derek Carr wants to have a Fantasy Day to remember, he needs to make perfect throws all day and his WRs need to make superstar plays. More important he has to use his legs to buy time for his WRs to get open. All of this is possible, but highly unlikely on the road. Do yourself a favor and Drive your Carr along with the entire Raiders Passing game, to your bench. 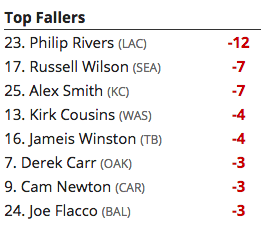 *Note on Kareem Hunt. I know he is putting up a fantasy season to remember, but once again this guy gets all his prediction in the 2nd half, last week he had less than 100 Yards going into the 4th Quarter then busted out a Long TD run at the 2 minute warning when the Chiefs were trying to run out the clock. He has a good motor and he is getting the stats, but he is not dominating football games from start to finish. Not once all year. 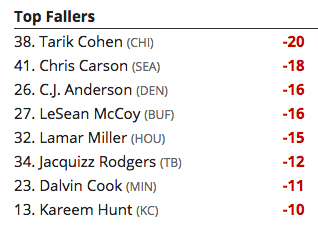 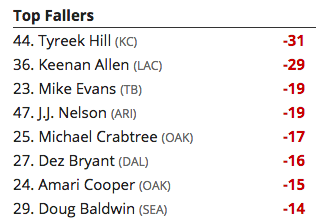 Do yourself a favor. Signup for the DAILY BEAST VEGAS PACKAGE. Make some money and return another Week.

HAVE A BEAST FOOTBALL SUNDAY