I know most of you are grateful for my Fantasy Football Advice which once again has everyone BEASTING and ready to win their league. However I want to flip the script. I am Grateful to God for directing a path in the search of infinite Fantasy Sports websites, for YOU to find BEAST DOME. I promise year after year I work as hard as I can knowing that God is watching my every move and guiding me to guide you all to a Championship. Give your thanks and Praise to god for finding BEAST DOME, do not praise me. Happy Thanksgiving!

If you did not signup for the Free Draft Strategy this year. You missed out on a good one. Full Story revealing Draft Guide coming in multiple episodes through the Fantasy Playoffs. 4 Teams have Qualified in the Best Ball Championship, more info below.

This Group is the core of the Draft Guide. Once Brees got injured in week 2, all Saints value took a HIT. Bridgewater was looking scared to risk anything but short throws, Saints offense was not scoring points.

Only if there was a way to Buy Low…

WEEK 5 – WEEK 12. WIN the League to advance to Playoffs

I took the BEAST DOME DRAFT STRATEGY and ABSOLUTELY DOMINATED

ALL MVPS are DOMINATING THEIR LEAGUES IN PLAYOFF POSITION.

Only 1 MVP is out of Playoff Race but still in Total Points Race.

Time for the BEAST DOME NATION TO FINISH UP STRONG.

Lions. Tigers. and Blough oh my! Lions ready to look like a joke on primetime TV. Without Matthew Stafford, does this even count as a real thanksgiving game? Blough will be running on his knees, more like running for his life when this Bears Defense comes in against this shaky Lions O-Line. Even though the Bears Run Defense has not been great as of late with all their injuries, it is very hard to imagine Bo Scarbrough running for the game of his life with Blough blowing the game. Bo Blough Blow. Fantasy Dr. Seuss. Expect Blough to hit quick throws as much as he can, TJ Hockenson is clearly not 100% so that TE is a committee, but Danny Amendola will be there a lot. Lions in danger of scoring 0 TDs in this game.

Mitch Trubisky is looking sharp right now, and he is running well. Look for him to a lot of time to disect this Lions Defense. Yes Slay is a great corner, and he will be watching Allen Robinson all game. However Robinson is in BEAST MODE and that Lions Pass Rush not getting to Trubisky might make Robinson too open all game long. With Robinson getting open, that will allow Anthony Miller to make plays down field as he will get increased targets with no Taylor Gabriel. Tarik Cohen is looking like the better RB as of late between him and David Montgomery. The Lions Run D has been solid for years and that trend should continue as the Bears are not that great of a running team. However with this game being one sided, both RBs can make an impact.

The Cowboys Defense is going to come to life at home, making it very tough for Josh Allen to get things going. As of late Allen has done a great job not making mistakes and is getting rid of the ball quickly. Against this Dallas pass rush, he will be doing a lot more of that. Getting the ball into the hands of Singletary is always a good idea, throwing it quick to Beasley will be ideal. Of course if the Bills offense really goes off, it will come down to some deep shots working with John Brown. The potential is always there, but the Cowboys will not make it easy. In fact, I would say Allen does not come through in the clutch on the road.

Dak on Thanksgiving in what really should be an easy win for this team. Expect Zeke to pound the ball like he is stuffing a turkey. Tons of power runs up the middle. The Bills D will be tired and break down. White against Cooper is a great matchup, but you know Dak wants to get his main man Amari in the end zone. If Amari is not in the endzone, Gallup or Cobb will be. Even though the Bills D has been great, this game on the road with no weather conditions to help them out. This will not be easy at all.

Shootout Alert, especially if Marshon Lattimore sits. I know the Falcons offense has struggled, even when they beat the Saints it was not their offense that won that game. It was their defense, the same defense that dominated the Panthers, but then found themselves giving up HUGE plays to the Bucs all game last week. That will not work when beating the Saints by giving up HUGE plays. Look for Brees and the Saints to really put up a ton of damage on the scoreboard anyway they want.

With the Falcons playing in comeback mode likely all game this week, look for Matty Ice to take flight. Julio Jones has been far less than 100% as of late, but he is still not guardable. As long as the ball is close, he can make a play. The Saints are not dumb however, they know if they take Julio out of this game, the Falcons have no chance. Expect a ton of double teams early and often, leaving Matty Ice throwing to Calvin Ridley. Devonta Freeman and Russ Gage are nice PPR options, Freeman will try to be established on the ground, but expect the Saints to have none of it. 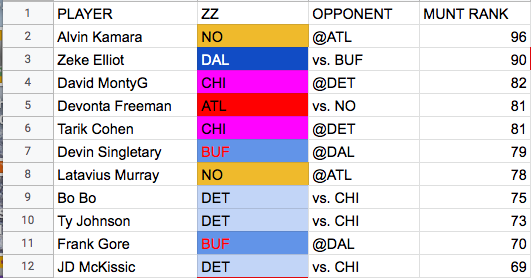 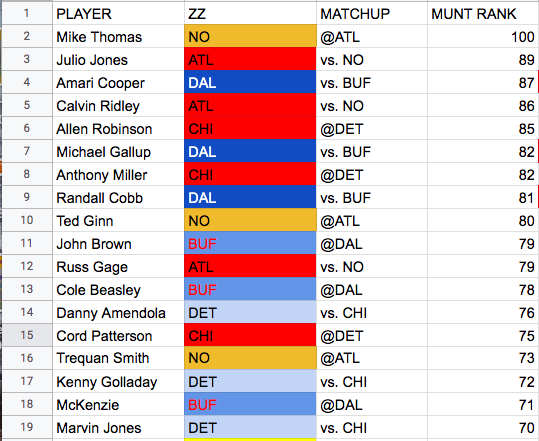 *SIGNUP WITH THE PROMOS BELOW & GET THEM FOR WEEK 13 FREE*

*USE PROMO CODE BEAST WHEN YOU SIGNUP ON MONKEYKNIFEFIGHT.com
MORE INFO BELOW* 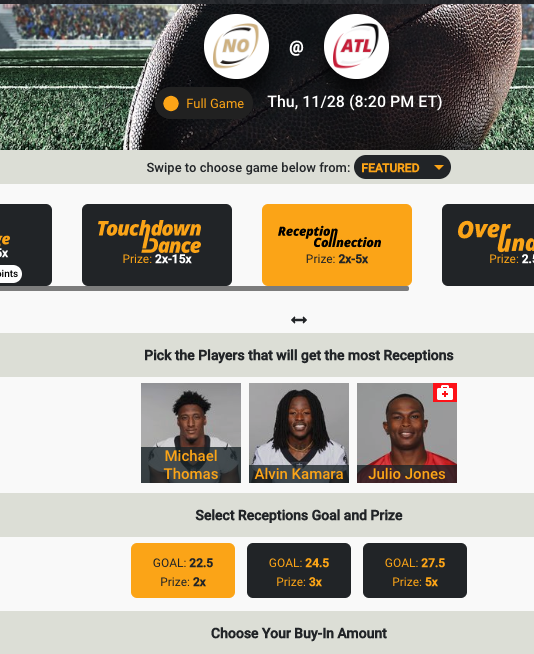 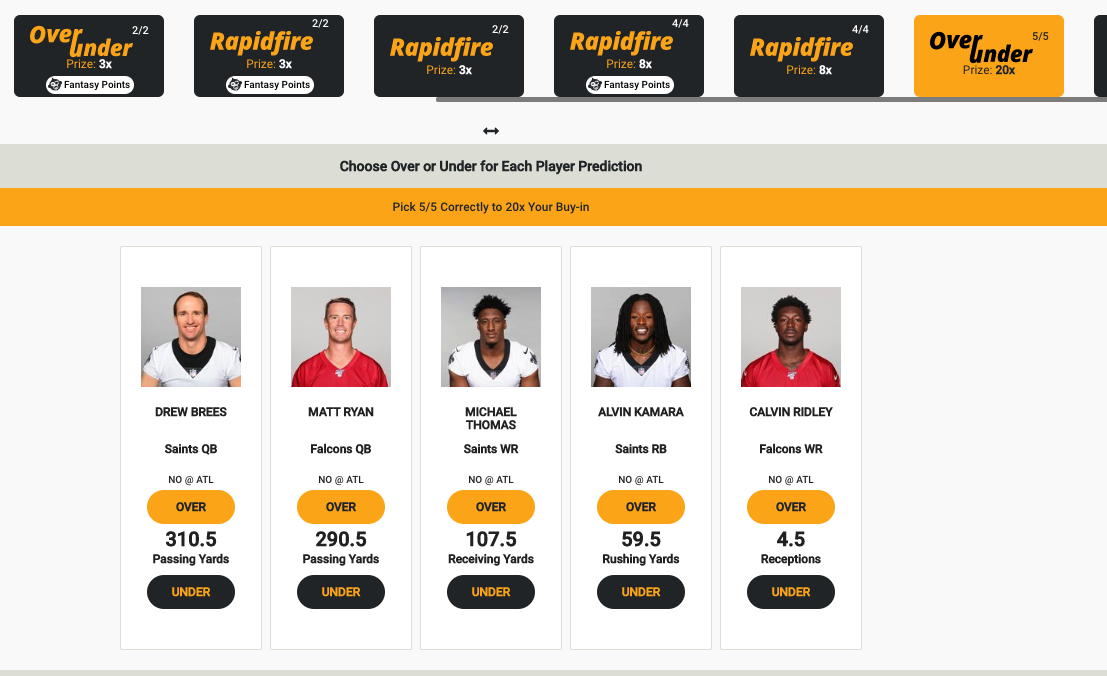 GET BEAST THE ODDS GOLD FREE FOR SUNDAY WEEK 13 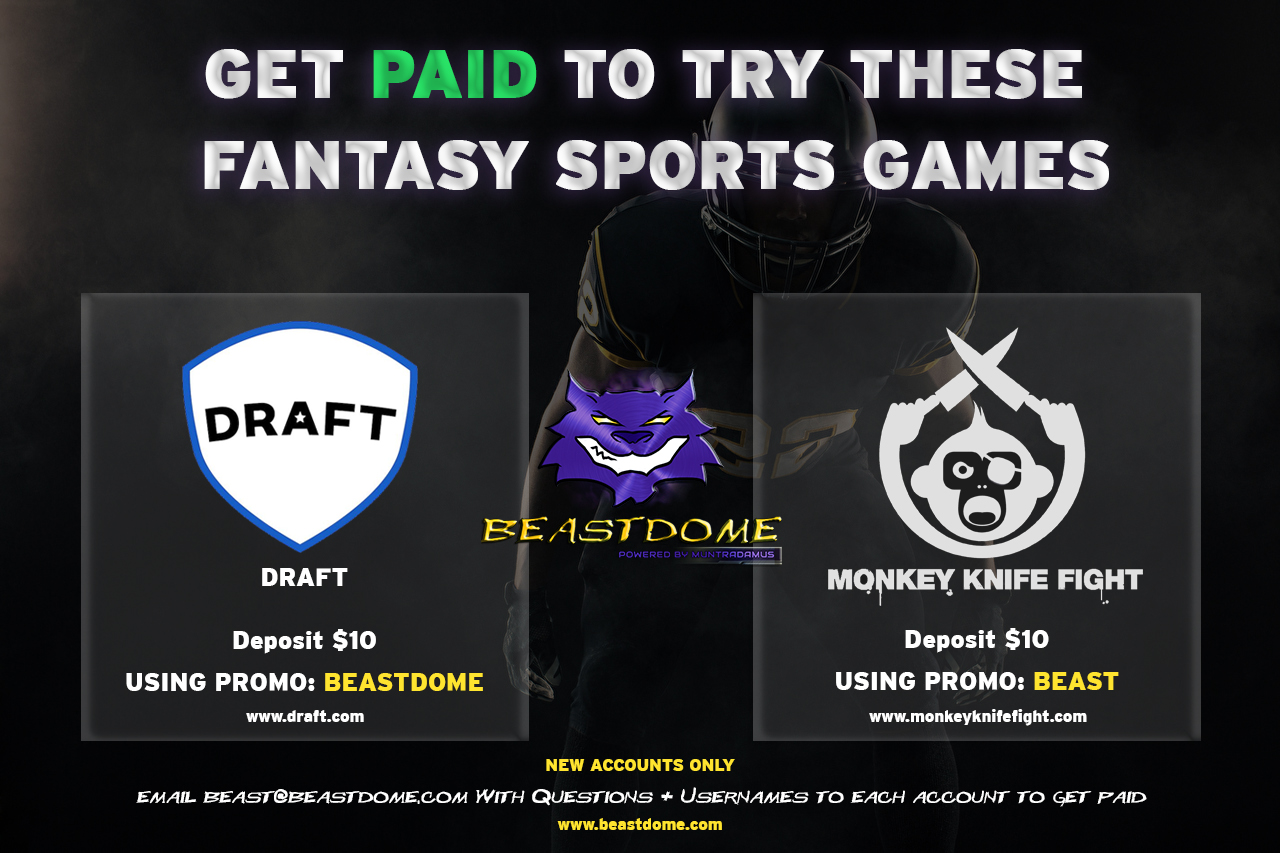