Right now we have NBA and MLB. It is important to keep your eye on the ball on both sports and BEAST at all times. These are the After Hours Analysis and FanDuel/DraftKings team.

Damian Lillard returns from the birth of his son, and just in time for a matchup against Austin Rivers who has no chance of guarding him. Clippers could be smart and throw Tyron Wallace on Lillard in order to slow him down, even swing Wesley Johnson to guard him. Damian Lillard is likely to be lethal tonight and with DeAndre Jordan dominating the paint, Portland will have to rely on their shooting. CJ McCollum should be a threat as well, and with no Mo Harkless even Evan Turner can get in on the phone.

The Clippers are going to have to figure out ways of scoring with their starting 5 with Tobias Harris having a difficult matchup with Al Farouq Aminu. With Tobias likely limited, Danilo Gallinari comes back at a great time to make a big impact. The matchup should be good on paper and he can definitely throw it up. Minutes should not be an issue as it was a hand issue and nothing that hurts his conditioning. Austin Rivers and Lou WIlliams will be needed for offense, and both have great matchups. Expect Lou to do more of the heavily lifting, but those minutes will be there for Rivers as well.

The matchup of the game is Nurk vs. DeAndre. DeAndre definitely has the length and athleticism, but Nurk is a strong dude. Either way DeAndre and the Clippers will be trying to run, and Damian Lillard and CJ McCollum will be ready to shoot.

Bucks are coming off of a HUGE road victory against the Warriors. Now traveling to LA to play a tough Lakers team, but no Lonzo. With Lonzo not playing, we can expect the Bucks to try to out run the Lakers. Giannis and Middleton are playing amazing basketball, while Bledsoe is doing his thing as well. Lakers do not really have an answer for Giannis, and Middleton will be able to find his shot no matter Ingram or KCP guarding him. Bledsoe will be aggressive, but Josh Hart can defend and he will be a bit of an Ex Factor. No other Bucks option is that promising, Henson and the rest of the team split minutes.

The Lakers are going to see how BEAST Randle can be. Kuzma can be a star as well and dominate the 2nd unit with Giannis not on the court, but Giannis and his rotation could end up guarding Kuzma. Brook Lopez has been the Lakers top scoring option as of late and it would be no surprise to see Brook continue his 20+ Point game streak. Ingram + Hart will be solid, but Giannis and Middleton will likely be too much. 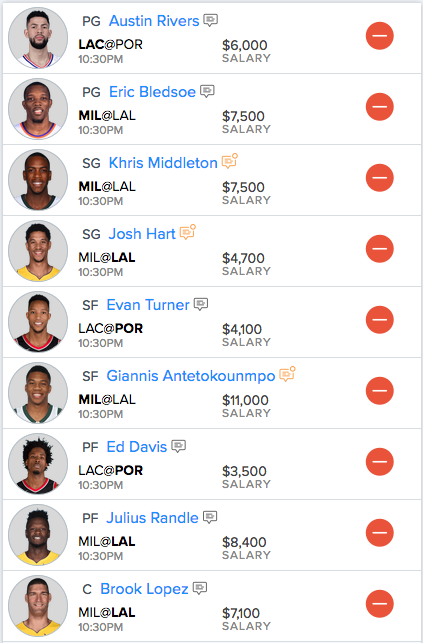 Johnny Cueto Rockets going up against a Dodgers offense that disappointed. Cueto was once upon a time a BEAST DOME Legend when no Expert gave him any love. The guy can rack up Ks, the guy can be hard to hit.

The Dodgers offense however is one of the best in the game. Consider opening day a fluke and this is a team that can hit any pitcher. There is no easy out in that lineup and if Cueto is not hitting his spots, the Dodgers offense can capitalize.

Pitching for the Dodgers is Alex Wood, who has been a strong pitcher for the last handful of years. Giants offense do have bats that can hit lefties like Longoria/McCutch/Posey and Pence. Have to give credit to Joe Panik for the HR of the decade. Not going to be an easy outing.

Tyler Skaggs is making his debut against a semi hot A’s roster. One bad pitch to Khris Davis and the Angels can find themselves behind on the scoreboard. Back of lineup can hit as well with the once sheep favorite Stephen Piscotty.

Sean Manea is the future, but the Angels have so many strong right handed bats that can read the young gun like a book. The fact Pujols already got going means the entire team is feeling the energy to start raking all around him. Manea is good, but this is one of the reasons you cannot draft him for this matchup.

Chacin returns to pitch against his old team in his old ball park. The Padres think they are improved, but Chacin knows the hitters after watching them everyday last year. Hosmer is a nice addition, but this team needs 4 or 5 hitters hot at a time to really get consistent run production. Nobody is a lock to hit a HR in that ball park on that roster on any given day.

Joey Lucchesi gets a chance to start his MLB career against one of the best hitting teams in the NL. At least they are in San Diego. While the matchup is not easy, Joey is a top prospect and his future could be bright. While I would not say he is going to get smacked by the Brewers, he could have a decent start just because these hitters have never seen him before. 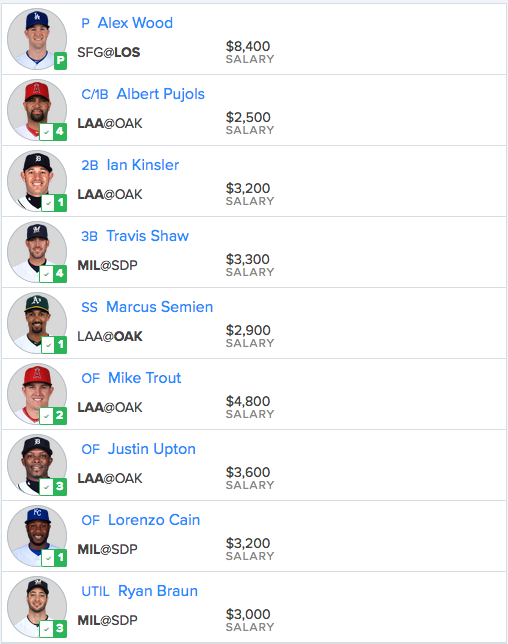