There is NBA and there is MLB, great time to be a sports fan. Lets attack the slates and put together the winning product!

Playoffs are on the linefor a lot of teams. These two teams are sitting comfortably in their seedings and counting down the days until they potentially meet in the Eastern Conference Finals. Boston is only 2 games behind Toronto for the #1 seed. Toronto wants this to be their year, and they will do what it takes to win this game.

Terry Rozier is listed as Questionable, and I will be the first one to tell you there is zero chance the Celtics win without Rozier. While Brad Stevens is a great coach, no PG outside of Shane Larkin leaves this team extremely vulnerable. Nobody to really guard DeMar DeRozan either with Marcus Smart who has been OUT for it feels like a couple months now. Boston will have to figure out ways to score outside of Jaylen Brown/Jayson Tatum and Marcus Morris. Al Horford will have to run the show, but Serge Ibaka can easily put him in his place. If there was a night for Greg Monroe to come alive and lead the Celtics to a huge improbably win, tonight would be that night.

The Pelicans have a Playoff spot in the grasp of their fingers. An easy, but not so easy game against the Grizz is all that is standing in their way to make it a reality. The Grizz have a somewhat energetic athletic team, something that has not been the case over the last decade that is all about defense and defense.

Kobi Simmons and Marquis Teague will be asked to run a lot, but do not be surprised to see Ben McLemore be the guy who really shoots the most of the three and run the offense. Dillon Brooks is coming off of his best NBA game scoring 28 Points on 26 Shots! With no Wayne Selden, all it takes is no Marshon Brooks for both McLemore and Dillon Brooks to be the obvious go-to offensive guys. Of course everything goes through Marc Gasol first, but Marc appears to be done with Memphis for the most part and as soon as they fall out of the game, Marc will fall out as well.

Rajon Rondo and Jrue Holiday will get by whoever Memphis throws in front of them, which should lead to plenty of assists to either Anthony Davis who is ready to go off for another big night, and Nikola Mirotic should be aggressive off the bench.

Doug Fister is coming off of an impressive 5 INN shutout against the Astros and now goes up against an Athletics team that is not hitting the ball. Khris Davis is a BEAST, Matt Olson has a solid future, but the rest of this team is not consistent enough to really pose a threat. Fister should be able to navigate another decent outing, at the very least a QS should but in the future.

Sean Manea is the lone bright spot of the Athletics rotation, and he has a matchup against a Texas team that is really not that big of a threat. Sure Gallo/Belte/Andrus/Mazara are all good players, but Gallo and Mazara are usually limited by lefties and Andrus/Beltre have yet to show big power this early on. Manea destroyed the Angels in his debut, and he can very well do it again.

Jon Gray is one of those pitchers that can be like Noah Syndergaard, when is on the road. Gray did get destroyed by the D’Back in Game 1, in AZ, but going to San Diego should bring his confidence backup. Not a lot of bats can do much in that lineup, forget about Villanueva and his 3 HR game. Hosmer is more of a line drive hitter, and Myers is not 100% and might not even play. Padres do not have bats that should have Gray worried.

Clayton Richard pitching for San Diego, he is truly a great pitcher. The Rockies do have bats that can make a difference in this game which will make things tough for Richard. Getting around Arenado/Desmond is the tough part, the wildcard is Trevor Story who is overdue a breakout game. Richard will not make it easy, but Story has made his living in these matchups. 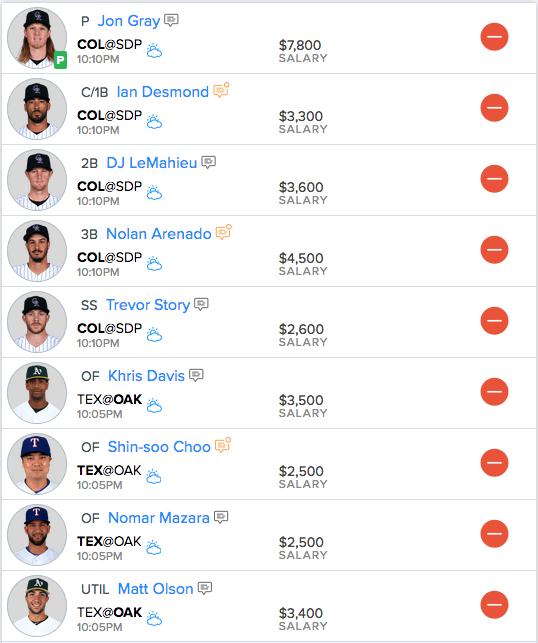