THE RETURN OF LONZO (LONZO BALL)

The Lakers return from break after co-hosting the NBA All-Star Game. While no Lakers made the All-Star team, they did feature 3 of their young studs in the Rookie vs. Sophmores game aka USA vs. World game.

While Lonzo did not play, Brandon Ingram + Kyle Kuzma are officially young stars in this league and the Lakers are stronger than ever as Mr. Semi Triple Double Lonzo returns against the Mavs. With Lonzo on the court, Isiah Thomas will definitely resume his co 6th man role with Kuzma, the player that gets hurt the most is Josh Hart. While Hart has been playing great, he will likely see most of his minutes as the backup SF for Ingram. He could also steal minutes from KCP who consistently plays 30+ a game. While KCP has a nice 3 PT shot at times, he also is wildly inconsistent and that can lead to a lot of lost playing time.

Tonight the Lakers go up against the Dallas Mavericks. Dallas was just criticized for officially “Tanking.” Along with bad conduct in their organization. Times have been tough for Dallas ever since they went all in on getting DeAndre Jordan a few years ago, only to end up missing all of the Free Agents they could have grabbed. Harrison Barnes and Wesley Matthews can lite it up, Dennis Smith JR. is a future stud and Barea somehow still exists in the NBA.

The problem with the Mavericks is Dirk is still on the court. While Dirk can definitely shoot with the best of them, he also plays defense with the worst of them. If Dirk struggles to guard either Brook Lopez/Julius Randle/Kyle Kuzma, which he will, then the Mavericks can find themselves on the wrong end of the scoreboard very easily.

Lakers are a young exciting team and they will put up a lot of points for the rest of the season. They will give up their fare share as well, but now the Lakers appear ready to be a Championship caliber squad as long as they grab a superstar this offseason, that superstar will be LeBron James who ends up winning rings with the Lakers and being a Hollywood star when it is all said and done. 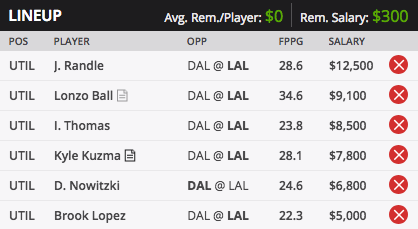