Below you are going to see a team so dominant. So dominant that you will hop on after this article and goto the image below and signup for a league.

After you signup tell me when your draft is. I will draft Live with you for Free, as well as give you a Free Week of Daily Fantasy Rankings to make a profit from right away to start the season.

After that you can also hit me up for questions throughout the year as I want to make sure you win the championship.

Note the team below I had the 10th pick. Lebron James was the 9th pick. I am still happy with my team, but know that you can have this exact same team below, with Lebron James instead of my 1st Round Pick..

Damian Lillard is one of the many faces of BEAST DOME. The first season I was on FantasyPros NBA, Damian Lillard was a Rookie and I ranked him higher than every expert. He is now one of the best PGs the league has to offer. With the Blazers losing all of their starters besides Lillard, Damian is going to have to carry this team by himself. While the assist numbers will not be superstarish for a 1st Round Guard, he is a lock to average over 25 Points a game with a boat load of 3PTMs. He will score over 40 Points a few times as well.

Paul George looks all the way back from an injury we just do not want to talk about. He threw up 32 Points in 23 minutes earlier this preseason, which means he is all the way confident and the Pacers need him to carry this squad. Every season for Paul George in his prime, he had to worry about Lance Stephenson/David West/Roy Hibbert all wanting their touches, now he is the star of the squad. Monta Ellis is a role player on this team, Paul George is a poor man Lebron James.

Steal of the draft right here. Easily a player who can get 20+ Rebounds a game as the Pistons are built as a small ball team racing up and down the court, with Drummond cleaning everything up. BEAST Season coming.

Hassan is a superstar who will get a ton of rebounds and blocks. Whiteside is only getting better and Chris Bosh is only getting weaker. Hassan was held back with a calf injury but he just returned to practicing and put up a huge 15/9 in a scrimmage game. Hassan and Drummond combined are two huge block shot/rebounding machines.

Kemba is the Kobe Bryant of the Charlotte Bobcats. With Mo Williams no longer on the squad, along with Lance Stephenson who wants the ball like a PG. Kemba will be able to return to his true point guard self as he leads the Bobcats through the East. Kemba has always shown flashes of greatness, it is time for him to reach the next level this season especially with wings like Nic Batum and MKG who are not big time shot attempt players.

Too late for Ty to fall. Ya there is some downside to playing with James Harden as Harden will want the ball in his hands a lot, but at the same time Harden can now spot up more instead of creating on his own. A back injury and a possible TMZ breaking story of him hitting a security guard in Vegas is going on. I believe he will be healthy and Ty Lawson this late is a pure steal.

The Suns finally have a big man who can dominate the paint. Tyson Chandler is in a very similar situation as Andre Drummond in Detroit. Big man with small people and the team wants to run. He could easily reach career high in rebounds and add a lot of blocked shots in the up-temo Suns games.

No Deron Williams in town anymore means Joe Johnson is going to have shoot more and more. He is 34 Years old but has played 79/80 games in back-2-back years. It is also nice to get a forward who can put up poor man Paul George stats on any given night. Good value for the King of Brooklyn.

Clarkson is quickly becoming the star for the Lakers this season. DeAngelo Russell is more of a pass first PG, for now, and the Lakers may even have him come off the bench. Kobe Bryant is fine letting Clarkson run with the team. He is clearly becoming the #1 option and as the season rolls on, he will only put up bigger numbers. Clarkson was a Fantasy Playoff MVP last season in garbage time for this team and Byron Scott has full faith in him.

Tony Wroten now out until December and Kendall Marshall could be out longer. Canaan Ball will launch 3s for my squad all day while these two are out. He will also rack up some nice cheap assists as the 76ers run more than any team in the NBA with a lot of run-n-gun shooting off of one pass. Isaiah is a huge sleeper and he will be the man to start the year.

Randle has a lot of superstar talent for a player that has not been able to show it. The Lakers are already committed to playing Randle at the 3/4/5 as he can handle the ball better than most bigs, and he explodes out of the gym. Randle reminds me of a young Zach Randolph with more speed, great value pick here, if Bass or Hibbert miss any time, Randle only goes up.

Zach Randolph is due to get injured one of these years as his knee surgeries are not making it any easier for him. Once Randolph goes down, Jeff Green will really have to step up and put up some Monster performances. The talent is there and he has performed on the big stage multiple times.

Henderson is very underrated. Coming from Duke as a Defensive Specialist, nobody really gave him the chance to be a good offensive player in their minds. This guy can flat out stroke from anywhere in the mid-range and with Al-Farouq Aminu and the overrated CJ McCollum, Gerald Henderson will have to do a lot of the heavy lifting that Wesley Matthews and Nic Batum left behind.

Evan Fournier is one of my favorites as this guy is one of the best combo guards in the league. He is not a flashy player, but if John Stockton could hit shots like Fournier, Stockton would be in a completely different ball park. Evan is not as good as a passer as Stockton that is for sure, but he is excellent at managing game temp and he can stroke from anywhere.

Tim Ducan is going to sit games out this season, he may even get injured and miss a few weeks. When that time comes, David West will be a Must-Start player as he is still very talented. David West may be old, but that mid-range and PF Post game will always make him dangerous in the end. He can easily be a Double-Double machine if he gets the minutes. 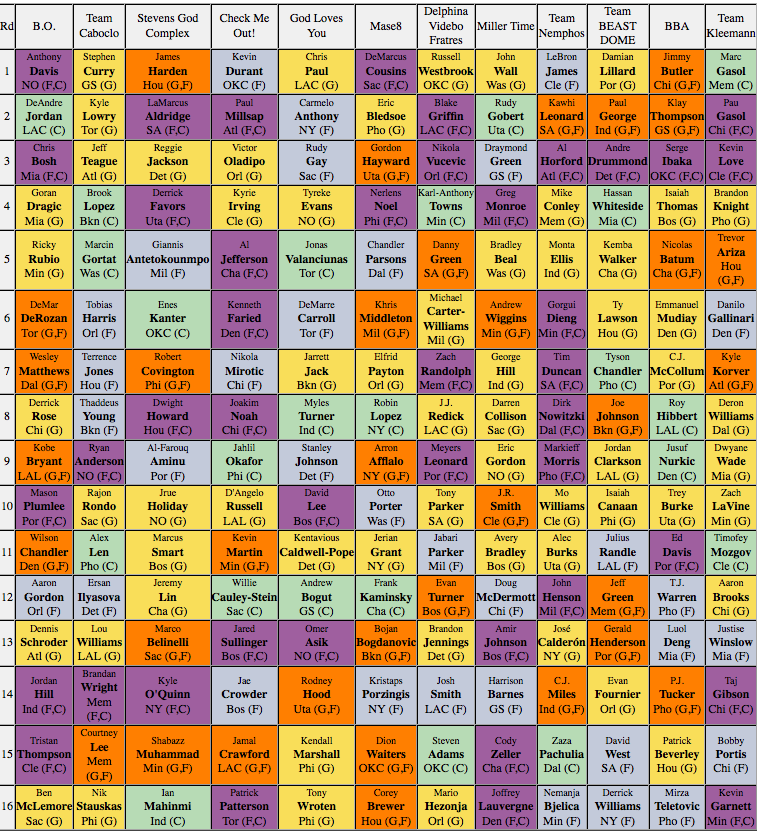 Jeff Green will have to fight to win that job as a starter. He will likely not start if someone on the bench has more games that week. Isaiah Canaan will start as long as the 76er PGs are injured. Julius Randle will start until he proves otherwise.