Last Thursday Night, I turned $40 into over $5000. I will look to do it again this Thursday, here is my Fantasy Baseball Mind for you to BEAST. 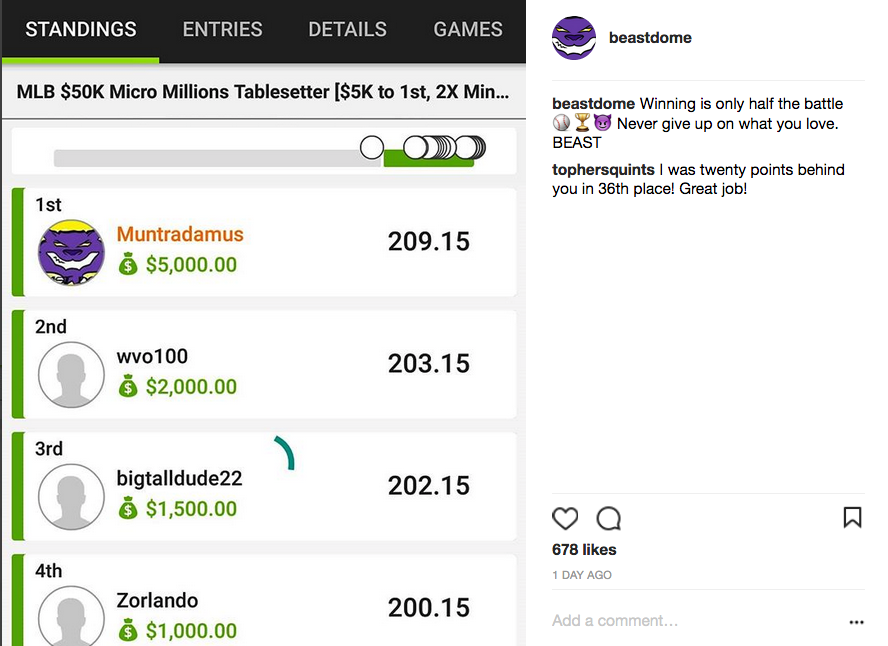 SIGNUP AND DEPOSIT $10 into FANTASYTHRIVE

GET MY DAILY ROSTERS AND PICK FOR FANTASY THRIVE FOR THE WEEK FREE.

E-Mail [email protected] when you signup or if you have questions.

Tanner Roark going up against the Phiilies in Philadelphia does not spell a recipe for success. While I do like Tanner Roark as a Buy-Low option in Fantasy after this start, I would do what I can to avoid him in this one. Phillies should be able to get batters on base all night, all that matters how they do when the runners are on base. For Roark’s case, I am worried for him.

Aaron Nola is the new Kershaw, before he gets that title offical, he needs to take down the Nationals at home. Bryce Harper has been ice cold and besides Rendon, no batter on the Nationals is really that hot which leaves Nola the chance to keep those bats cold. Not the best situation for Nola going up against these veteran hitters, but at least he is facing them at the righ time.

Lance McCullers is hit or miss and he goes on the road to face a very underrated Tampa Bay team that has quiety won 5 in row, against the Yankees and Nationals for that matter. The hitters are hot and they are confident against any pitcher which puts McCullers at risk. Still, McCullers is one of the most electric pitchers in the AL and this start will not be easy for the Tampa Hitters.

While Stannek is the starter, Yarbrough will likey come into face an Astros team that has a lot of hitters that are hitting the ball well. The entire lineup is smoking right now and there is a chance Correa returns on top of it all. Not a good day to be a Tampa pitcher, with Bregman and Altuve raking, everyone around them is dangerous. Even #8/#9 Hitter Jake Marisnick will be coming into the game very confident.

Junior Guerra on the mound for the Brewers against a Reds team that is hitting the ball with confidence as of late. While Joey Votto has yet to get going, as well as a majority of the Reds hitters, they are coming off of a breakout offensive game against Sean Newcomb on the road. Traveling home they will be motivated to hit Guerra who they have all seen many times at this point being in the same division. The Reds bats can definitely do some damage.

Anthony Descalfini is definitely a pitcher the Reds will want to keep long-term. While he has been hot, this is a matchup that does not look good on paper. A lot of the Brewers hitters can take Descal deep if he makes the mistake pitches. Duffy did a good job limiting the Brewers yesterday and their bats are not scorching hot, but they are in a favorable ball park.

Jamie Barria has somehow been getting it done. Not via the strikeout, just not allowing the ball to be hit where they are not. While that formula works against some soft offenses, that will not work against a Red Sox team that is hitting the ball everywhere these days. Not a hotter offense in Baseball and Barria is not facing them at the right time. He will be lucky to not blow up in less than 5 INN.

Brian Johnson is getting a spot start, and after a matchup like this one, it could be his last spot start. The Angels have a ton of power throughout the lineup that can take the lefty Johnson who has nothing unique about his pitches. Angels will be ready for the slugfest.