I am very close to another Fantasy Sports Daily Championship.  While I am in my zone, content will be Fantasy Football for the time being. 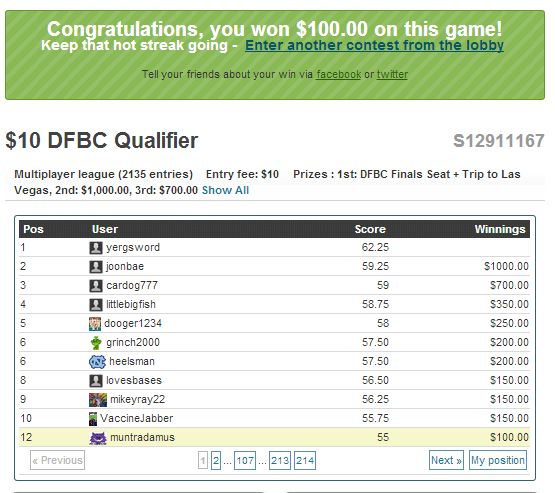 Before that happens, BrooklynBums aka Andrew Levy will give you his..WHERE YOUR SWAG AT?!

This week, if you want to see first hand the definition of swag, look no further than Gerrit Cole. This rookie started his first 2 games of his career in the Majors and did not disappoint. In this weeks 2 starts, Cole went 2-0 and only gave up 5 earned runs. His K’s will come and he looks like he is going to have a bright future in baseball. Now lets look at the swag-less players of the week.

This first player may make you scratch your head but I have my reasons. The hitter I want to look at is Ryan Braun. Now I know Braun is one of the best fantasy players out there but lately he looks like he should go back to little league. Although his numbers might say differently. He is batting .303 with 9 HR and 36 RBI’s. The pace that puts him on to finish the season is well below the normal numbers that we are use to seeing from Braun.

In the last week, before Braun hit the DL he did not produce a single HR and had only driven in 1 RBI. Also did I mention he had 1 stolen base? This trip to the DL might be the best thing for Braun. Not only will it help him mend his injury but it should help him get his mind back in the game.

BRAUN, WHERE YOUR SWAG AT?

This week we take a look at the ATL Braves rotation. The Braves always have a strong rotation and this year is no exception. So we will take a look at Tim Hudson. Hudson has always been Mr. Reliable for the Braves. This season however he looks to be on a downward spiral and for the Braves sake he needs to pick it up.

The good thing about Hudson is he is an innings eater. He always gives the Braves around 7 innings. That does not mean he is always good for 7 innings. In the last 7 starts for Hudson he has gone 0-5 with 2 no decisions. In the 5 losses he gave up 21 runs while only having 21 K’s. The good thing about Hudson is he keeps his BB’s down. I am not saying the braves should bench Hudson but they should look at the trade market and see what they can get for him.  So should you with his value as low as it is.

HUDSON, WHERE YOUR SWAG AT?