We are full swing 100% engines forward into Baseball season.  The 1st Round in Fantasy Baseball is an important one as this player has to be ROCK SOLID for all of 2013 if you want your chances of winning to be a little easier.  The question remains, who do I draft First, who should I take?

You can test our your down Mock Draft with FantasyPros Mock Draft Tool.

MOCK DRAFT SIMULATOR
The easiest way to prepare for your draft.

Fast. No waiting for opponents to pick.

Free. You don’t even have to register. 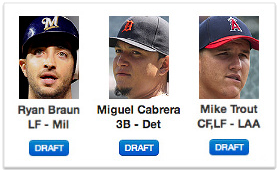 With Matt Kemp being your #1 overall pick you know a few things.  A) You have possibly the only 50 HR/50 SB player that could have 100 RBIs.  B) You have a player that is on a stacked team where scoring runs should not be even close to a worry.  Which means it will be hard to pitch around him.  C) He was the #1 Overall Pick last season and was playing like it until he got injured.
No reason to doubt Kemp.

Sticking on the theme of 50 HR/50 SB players, Trout will have your Fantasy Team fishing for whatever specialty categories you need as Mike Trout will give you a solid base in all the categories, especially Runs Scored.  Trout is a BEAST and could be in for a huge season coming into camp 15 LBS bigger than last.  Trout is so young, who knows how good this guy can be.  Already easily the #1 Player in baseball today, the only reason Trout is not #1 is because of the RBI category.

2B is by far the thinnest position in Fantasy Baseball this season.  Which means it is vital to get a BEAST when you can get a BEAST.  Robinson Cano is the only legitimate 40 HR 2B option in Fantasy Baseball this season.  While 40 HRs is pushing it, 30+ with a batting average well above .300 and 100+ RBIs makes him feel pretty close to indestructible.  You know that if you get Robbie, 2B is not only covered, but it will not be a weakness all year.  Other teams will be scrambling on the Wire all year who wait at this position.

Steroids or not steroids, Ryan Braun is still a Fantasy Beast who will not only hit 35+ HRs, but he will steal 30 Bases.  His batting average is also top notch and everything else you want from a star player is included with Braun.  Ryan is arguably the #1 Overall Pick in most leagues, but I would rather have the RBI potential of Matt Kemp in that Dodger lineup, as well as Mike Trout and his HR/SB/Run Potential with the Angels.

Pujols could not have started 2012 any worst.  In the entire month of April Pujols failed to hit a HR, while hitting .217.  His batting average got as bad as .197 in Mid May with only 1 HR, yet he still managed a .285 batting average with 30 HRs and 105 RBIs.  It took some time for Albert to get used to American League Pitching, but once he did his bat took off quickly.  With Josh Hamilton protecting Albert in the batting order, you can expect a lot of fastballs when pitchers fall behind to avoid the big Inning.  When you throw Fast Balls to Pujols,  you get the Machine.  The Machine could easily get 50 HR/140 RBIs.  Make sure you get a front row seat.

With Miguel Cabrera, you are getting the Rock of all Rocks.  You know he is going to hit over .300, you know he’s going to hit around 40 HRs, you know he’s going to be among the league leaders in RBIs.  There is no drama with this selection as he is possibly the most feared hitter in the American League today.  The only reason Miguel is not ranked higher in this mock draft is because Comerica Park is not the most generous to power hitters.  Miguel will still get his, but his ceiling is not as high as these other players.

Josh Hamilton was easily the best hitter in Baseball right next to Matt Kemp to start the 2012 season.  Hamilton seemed destined to break Barry Bonds record of HR’s in a single season, that is until it all started to fall apart.  Josh Hamilton lost complete focus and turned into a free swinging left handed strikeout hitter.  We all know and have seen Josh Hamilton play at a MVP level, going to Anaheim where is not even the best hitter on his team will put him in place.  The Angels are going to score a lot of runs, and there is no reason to think Josh Hamilton cannot hit 50 HRs and knock in 120 RBIs.  He should be the most dangerous player in the Fantasy game, but as you know a little bit of risk comes into play with his loose head.

Carlos Gonzalez is going to be a machine every season for the Rockies.  Playing in Colorado for all of his home games is such a huge advantage that cannot be described in this sentence.  So I will try this one.
If you have a backup player who has a week in Colorado, and you have a similar player who plays in tough hitter parks.  It is a no-brainer to throw the player who is in Colorado for at least 3-4 games in your lineup.
There are full weeks where CarGo has nothing but Home games.  40 HR/40 SB is always on his radar, and it should be on your draft radar as well.  If you skip on him, hope he comes back.

Tulo is easily the best Fantasy Shortstop in the game when you look at his Power numbers at the position.  30+ HRs would put him in a class of his own, and if it was not for an unfortunate injury in 2012 which cut his season nearly in half.  30+ HRs would have been there.  He is the best hitting SS in the game, he plays in Colorado  and he will throw in an ELITE .300+ Batting average with 100+ RBIs and double digit steals.  Hard to ask for anything else from a SS.

When you take Justin Verlander in the 1st Round.  You know you have an Ace who will give you that big pitching performance when you need it most.  With the return of Victor Martinez and the addition of Torii Hunter, you can expect a lot more run support.  Because the Tigers have such a bad bullpen, you will have a fun time seeing Verlander go Complete Games, which could lead to those epic 14 strikeout performances.

Kershaw had one of his worst seasons last year with a 2.50 ERA and less than 230 Ks.  That’s how good he is, and his potential is still sky high as he turns 25 this month.  The Dodgers Bullpen is rock solid this year, the team as a whole has World Series on their mind, and the offense should be the best in the NL.  Take Kershaw with the confidence knowing you have one of the best pitchers in the game who could lead in every category.

In Strasburg’s first season back from Tommy John.  He threw 157 INN, which is usually 100 less than what a big starter will throw.  He managed 15 Wins/197 Ks, and an ERA that was much more dominant than it appears in paper, 3.16.  With the Nationals encouraging the notion of Stras throwing over 200 INN’s, you could easily get the MLB leader in Ks as well as a pitcher whose ERA should be below 3.00.  Stras is unhittbale when he gets going, and with the Nationals sporting the best bullpen in Fantasy Baseball.  I have no problem taking Strasburg with confidence in the 1st Round.

While Joey could still lead the MLB in batting average, the Power and RBI potential at the 1B position is so deep, that his numbers don’t stand out enough when you can wait until the end of your draft to pull a player like Chris Davis.  Davis could easily hit 35+ HRs, and while he will not hit above .300, you can use your 1st round pick on something more wise and more “ahead of the pack” material.  Not just a great guy at a deep position.

Prince hit 50 HRs in 2007.  Ever since he became a vegetarian in 2008, he has only hit over 40 HRs once.  Last season in Comerica park, “Where hitters go to have a hard time.” Prince was only able to knock out 30 HRs/108 RBIs while hitting .313.  While those numbers are good, Albert Pujols was able to do the same thing while going negative for the first month and a half.  The ballpark does not favor Prince to be a 50 HR player, and I would rather get a game changer player in the 1st round, then a 1B with 35 HR potential when there are studs like Chris Davis who go much later.  Do not get fooled by the Prince, those 50 HRs will not come.

Top 300 Coming in the next Draft Guide.