STEAL YOUR SEASON BACK (WEEK 3)

Last week I showed you all 3 teams I am managing, this week I am going to focus on the team that is doing the worst of all the teams. The reason this team is doing so poorly, Stolen bases. 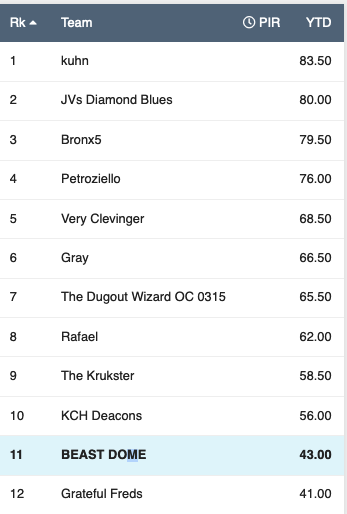 This team could win $125,000 if it finishes in 1st Place overall. Right now that is hardly looking the case. However I am still more than confident.

The problem with this team that many other Fantasy Baseball owners are going through, they did not draft any speed. Dee Gordon or TreaTurner are the only two base demons.

0 SBs on the season as a team. Luckily Moustakas will qualify at 2B soon and I can bring Elvis Andrus off the bench at UTI, but Andrus alone is not going to carry me in speed. Especially with Ian Desmond struggling and McCutch/Segura yet to even think about running.

The answer is simple, the BEAST DOME LEGEND.

Keon has the wheels to steal 40+ Bases. In his lone start this season, he has 2 SBs. The Mets have an injury riddled OF with Lagares, Conforto, Nimmo. Keon is the future and if he continues to play well, including game winning hits like he did on Saturday, Keon will get more Playing time.

Keon has always shown the tools to be a 30 HR/30 SB guy, and the Mets surprisingly are not taking the steps to see what he has. Regardless, you stash him on the bench in all leagues. The second he becomes a starter, it is already too late to add him.

With Brock Holt out for 10 Days, Eduardo Nunez is a good plug n play for SBs. Nunez has shown the ability to steal 30 bases easily, it is only a matter of the Red Sox running him.

Thames is a BEAST who has shown he can hit 40 HRs. He is on fire right now, and Jesus Aguilar is looking more like a pinch hitter than an everyday 1B. The DH Rule is in effect to start the week for the Brewers in Anaheim, expect Thames to get everyday PT while he is riding out the hot streak. It is one worth jumping on.

Arcia is on FIRE and now is the time to add him if you need a SS. Arcia was the prize possesion for the Brewers when the Angels traded for Greinke. Arcia returns to Anaheim on Monday and it could be the start of the real stud performer he is.

Velasquez is as risky as they come, but the Phillies are the best team in Baseball so that does mean a lot of wins. Velasquez is going to make his debut this week as a 2 start pitcher, his strikeout volume is the type that can lead the majors, but he does come with a lot of risk. As long as he faces weak NL teams like he does this week with the Nationals without Turner and the Marlins, then Velasquez is worth the risk.