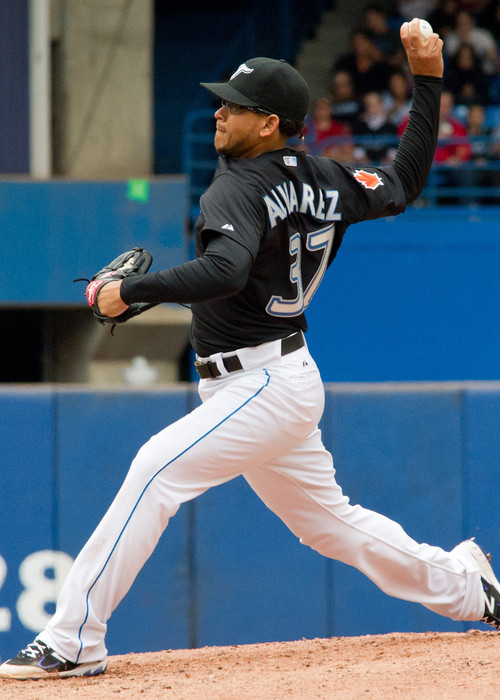 Hello again, WunderChad here. This is my second post for Beast Dome, and my first in a series I’m calling “Spotlight.” Here, I’ll shine the proverbial spotlight on something interesting going on with a particular player that you might not be aware of, or are aware of and are just very surprised by and would like some context. Today’s spotlight is on Henderson Alvarez. Enjoy!

Once. That’s how many times in the last 20 years a pitcher threw at least 150 innings with a K/9 rate of 2.5 or lower. His name was Nate Cornejo. He was 6-17 with a 4.67 ERA and a 1.51 WHIP that season, 2003, and was out of baseball two years later. Through his first 5 starts of 2012, Henderson Alvarez has struck out just 9 batters in 32 1/3 innings, a K/9 rate of 2.5. This isn’t exactly new territory for Alvarez,who also had very low strikeout rates in the minors, due mostly to his lack of a good breaking ball. He was able to get by in the minors on the shoulders of his above-average control and a fastball that sits at 93-94. It takes a lot more to be an effective big league starter. Here’s where you make the argument that Alvarez has been effective, and cite his 3.62 ERA and 1.11 WHIP. I’m here to tell you that he is surviving on extreme luck. His .196 BABIP is 4th best in the majors, and about 100 points below what is to be expected. A BABIP of below .260 is considered lucky, so .196 is jackpot territory. Furthermore, his FIP (fielding independent pitching) is 5.92, 5th WORST in the majors. If Alvarez had normal luck so far, his ERA would be really, really bad. Now, I’m not suggesting that what happened to Cornejo will happen to Alvarez. He’s only 22 years old, and has some of the skills required to be a potential number 3 starter for the Blue Jays. But unless he works more on his slider or develops another pitch, he’s destined to come down to earth hard. And your fantasy stats with him. Consider yourself warned.