Cashed top 5 in two tournaments yesterday, my big one below.  Fantasy baseball notes..

Dan Straily: Makes his first MLB start. He already has Must-Own Keeper Status before the game even begins.

Ryan Dempster: Was terrible in his Ranger debut, the run support will be there but the ERA was a fluke.

Boston Red Sox: Are slowly turning into a joke.  At least Jon Lester had a decent performance in the loss.

Toronto Blue Jays: Slowly looking like one of the worst offensive teams in the AL.

Brandon Inge/Adam LaRoche: Both red hot with hitting steaks over 10 games.  Both showing power during the stretch.

*Top 5 at each Position will be back Saturday.  Friday there is a Q.

4/14=28.5% keeps me on pace for a record week.  No picks Friday, Q. Saturday is last day of week because of another Q Sunday 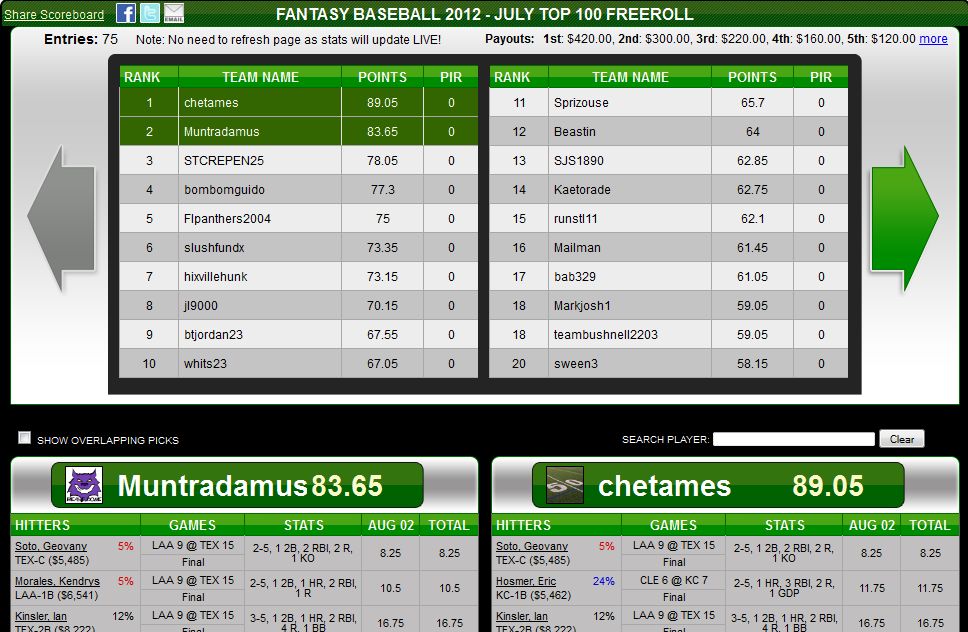 There is a Q, but I will give you a junkbox team.  If you want one of my Elite teams please e-mail [email protected] I will send it for free, just want to know who I send it to.

It is hard to imagine the Yankees losing this one to the Mariners coming off one of their best offensive performances of the season.  Despite the Mariners being red-hot, the Yankees should get to Millwood who has terrible history against every Yankee hitter.

Muntradamus is a Fantasy Sports Expert who specialize in Fantasy Football/Baseball/Basketball. He is currently in his first season as a Pro on FantasyPros where he is the only expert to have Adam Dunn, Mike Aviles, and Wilin Rosario in his top 20 at each position. Muntradamus not only leads many to championships with his great advice, and outlooks into the future. He is also consistently on the top of leaderboards in DraftStreet. In August he will compete in a $200K tournament that he qualified for of 40 people.