After two bad days of DraftStreet I have revamped my old strategy with my new strategy to get a winning strategy.  Fantasy baseball notes..

DODGERS OFFENSE: Surprisingly has gone cold.  Matt Kemp is feeling it, but nobody else is being consistent. Next the re-building Cubs come into town which should be a series where they can turn it around.

JIMMY ROLLINS: Is the hottest SS in baseball right now.  He is doing what he can to carry the Phillies team through the depression.

BRANDON INGE: Keeps his 11 game hitting streak alive with a HR which gives him 4 during this streak alone.  Hot fantasy option at the moment.

MIGUEL MONTERO/CHRIS JOHNSON: Making the back of that Diamondback lineup strong for the 1st time all season.

BREWERS OFFENSE: Hottest in baseball right now. Next they travel to STL, I expect the fireworks to continue in that heat.

*Top 5 at each Position is back! 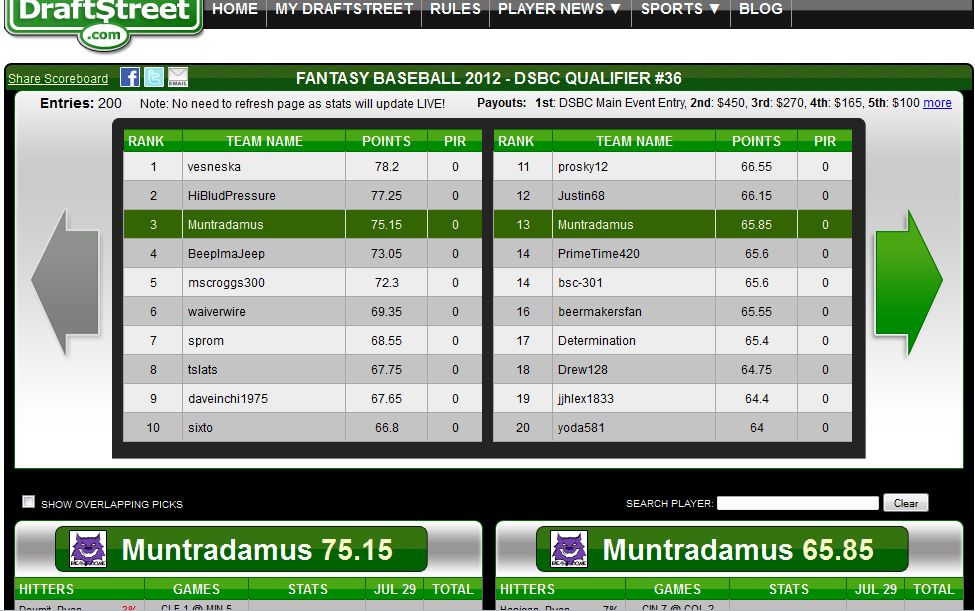 There is a Tournament for top 100 Players of the Month that I am in.

But I will give you my junkbox team.

The Rockies offense has a tough test against Lance Lynn who has been perfect besides one fluke start against the Cubs.  He will get all the run support he needs in this one to easily carry out the victory.  Alex White has no chance of slowing down the Cardinals.

Muntradamus is a Fantasy Sports Expert who specialize in Fantasy Football/Baseball/Basketball. He is currently in his first season as a Pro on FantasyPros where he is the only expert to have Adam Dunn, Mike Aviles, and Wilin Rosario in his top 20 at each position. Muntradamus not only leads many to championships with his great advice, and outlooks into the future. He is also consistently on the top of leaderboards in DraftStreet. In August he will compete in a $200K tournament that he qualified for of 40 people.