COFFEE IS FOR CLOSERS (SHANE GREENE)

The Closer Position is a Position that generates a very similar pattern year after year. There will be a group of pitchers who you can consider in the BEAST ELITE category that always finish at the top of the game (40+ Saves). There is a group that gets the job done on a consistent basis with (30+ Saves). Then there is the Waiver Wire Group where you will see new closers appear throughout the year, this group can get you 20+ Saves if you get your season right.

While it is never a bad idea to load up on the 40+ Save Guys, it is always a good idea to find those sleeper 30+. Year after Year on FantasyPros I target the best closers, most notable of them all was Fernando Rodney leading the MLB in Saves a few years back as a ‘Jason’ Marquis sleeper closer.

This year one of those candidates is closing for the Detroit Tigers, Shane Greene.

Shane Greene used to be a starter for the New York Yankees in 2014. The thing that stood out the most about Shane Greene is how much movement he would get on his pitchers. As a starter there would be nights Greene would get as many as 10 Strikeouts.

This reminds me Octavoi Dotel, who did end up finishing his career as a Detroit Tiger. Dotel was once a starter for the first two years of his career. After struggling to get through orders more than once or twice around, the Astros converted Dotel into a closer, which allowed him to pitch for 15 Years where he ended up with 109 career saves.

Shane has battled heart problems and arm problems in 2015 & 2016. Finally in 2017 Greene was healthy and he put up amazing numbers, especially to close out the season. 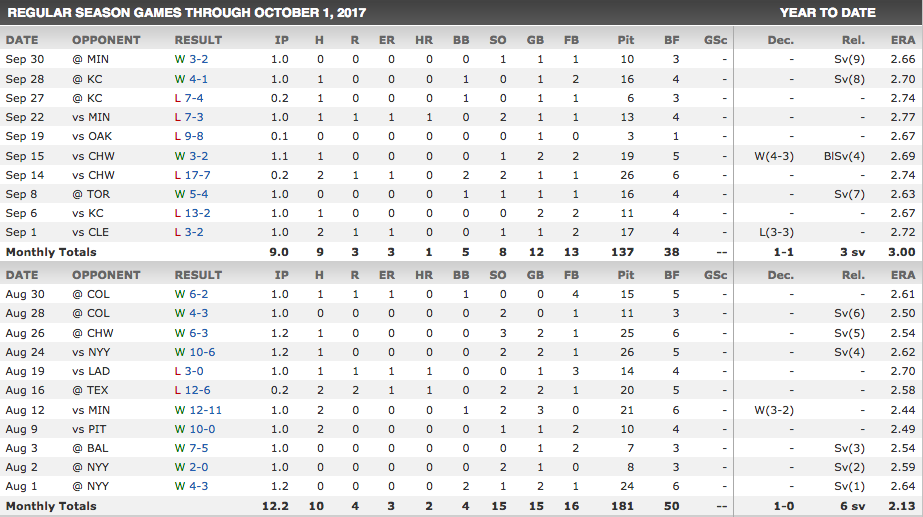 As a closer that is an ERA around 2.50 with more Strikeouts than Innings Pitched. To add fire to the flame, 9/10 in Save Opportunities which would come out to 27/30 over the course of a full season.

DRAFT SHANE GREENE as a Dominant Closer in Fantasy Baseball.