The Phantom Of The Draft

When people enter their draft room in the upcoming weeks. It is going to be hard for plenty to pass on the BEAST power OF option in Giancarlo Stanton. While many believe Stanton is the best hitter in baseball, a lot of people are considering a very important X-Factor when choosing the BEAST from the NL East. This is the type of X-Factor analysis which seperates BEAST DOME from the other Fantasy Baseball Sites.

While you can say, “Giancarlo will brush it off.” The truth is he will not. When hitters get hit in the head with a pitch, to the point where it leaves them in a state of blackout. They will never be the same confident hitter.

Best example of this was Sammy Sosa.

Sammy Sosa got hit on April 20th. After that moment he only hit 1 HR from that April 21st-June 10th. Eventually Sosa shrugged it off and hit 30 HRs the last three months of the season, but the point is there is a HUGE shock rate that comes when getting hit. Sosa only lasted two more season in the MLB after this incident and eventually retired even though he still had 30+ HR potential in his bat.

After the incident, Giancarlo created a custom batting helmet for himself to avoid the potential of being in the face again. 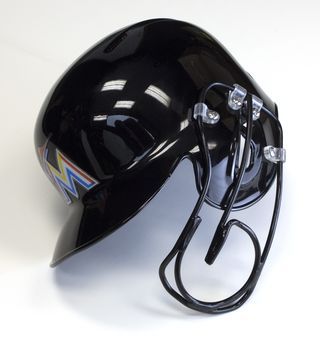 A few things bother me about this situation.

1) Mentally he is clearly bothered by the situation. Very extreme to be going to this new batting helmet.

2) What happens when he gets in the head again by a pitch.

3) While Spring Training is just Spring Training. He only has 1 HR in 20+ games. If Giancarlo does not hit 35+ HR’s this season, he is a BUST. Even then he is not over the top worth a 1st Round Pick. There is no reason to spend a 1st round pick on a player who goes 32/100/10. While those numbers look nice, someone like Matt Holliday can easily approach him and he goes 6-7 Rounds later.

OF RANKINGS (VIP ONLY)

There is too much risk in taking Giancarlo Stanton not only in the 1st Round, but the 2nd and 3rd Round as well. There is no lock he is ever comfortable with this batting helmet, and there is no lock he does not get in the head again leaving himself unsure and confident at the plate.

Every Fantasy Expert is steering everyone to taking Giancarlo in the 1st Round as an automatic Top 7 Pick. You now have the knowledge to avoid a land mine, and take a much more valuable Hanley Ramirez in Round 1 who will give you the same production, but at the SS position. Even with a good season, unless Giancarlo leads the MLB in Home Runs. He is not worth a 1st Round Pick.