First Base is one of those positions where you better be a BEAST if someone takes you early, because just about every 1B option in the game today can easily hit 20+ HRs. The Best hit 35+, the middle tier hits 25+, the lower tier hits 18+. Now what if I told you there was a 1B option being drafted like a Top 5, that is really just a middle Tier player. Ladies and Gentleman, I present to you.

There are so many different ways to look at this and see that Freddie Freeman is in for a horrible 2015. First let us start with the obvious, playing half of your games in Turner Field is no advantage. Turner Field in Atlanta has been one of the best pitchers ball park since it has been around. There are going to be a lot of hits from Freddie Freeman which would have been HRs in other places, instead it is a loud out in Atlanta.

Now let us dive deeper into Freddie Freeman and realize this. Freddie Freeman only hit 18 HRs last season in 162 games, and his career high is 23 HRs. That is not power that excites me, and while I do think Freeman will hit more than 23 HRs this season, I am still not expecting him to hit 30.

How about another layer of analysis. The Braves lost; Justin Upton, Jason Heyward, Evan Gattis, BJ Upton, and Dan Uggla. The replacements are players that are unproven or just flat out horrible. Except for one player. The Braves did manage to bring in Nick Markakis, but his batting average is not top notch and it is very likely Freddie Freeman comes up to bat with nobody on and 2 Outs at least twice a series.

One last point that will make you laugh when someone drafts him early. With Chris Johnson being the likely cleanup hitter at some point, pitchers will make sure they do not throw anything hittable to Freddie Freeman all season long.

The Braves are a really bad team this season and even with a breakout season from Freddie Freeman, you cannot justify his high rankings that other experts are giving him.

ALL 1B RANKINGS (VIP ONLY) 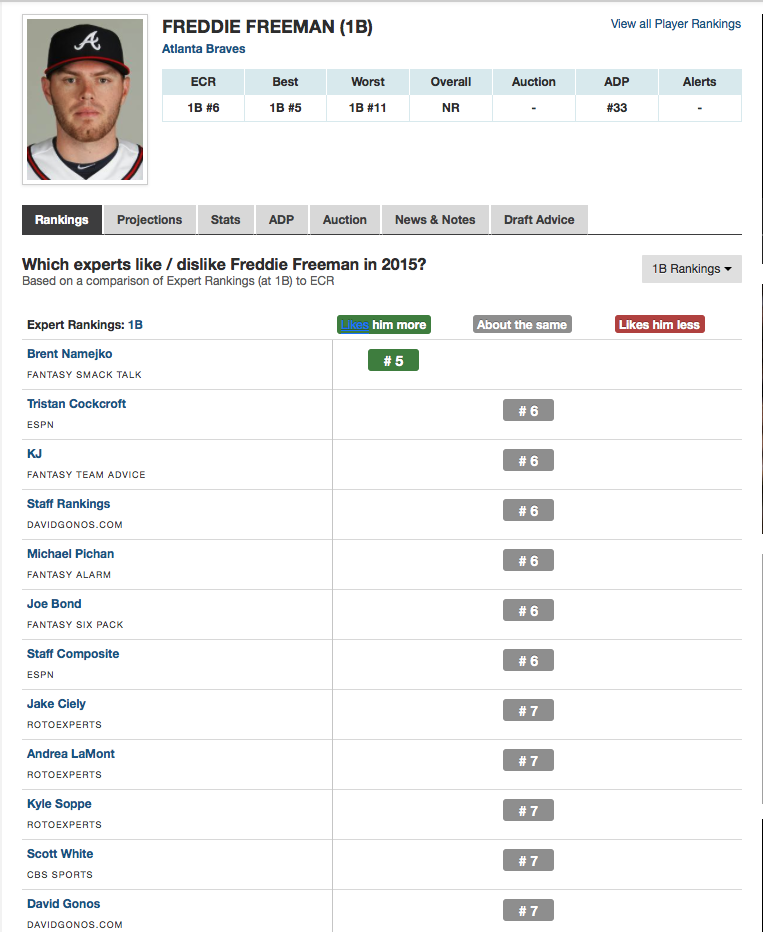