They Call Me Melo Yellow

It was a Journey.  A journey with ups and many downs, but can only be summed up by one event.

Carmelo was the Michael Jordan of the Denver Nuggets for 7 1/2 seasons.  He never averaged less than 20 Points a season, even in his All-Star Games as a member of the Nuggets.  He carried that Franchise into the Western Conference Finals, he took them to the playoffs every season since his rookie year. Denver has never had a player like Melo before.

And for the first time since being traded to New York, he gets a chance to put on a show against his old team in his old stadium.  A sell-out crowd of people who used to warship Melo as if he were the Michael Jordan of the Nuggets whether they admit it or not.

What does Carmelo do in this situation.   He drops 9 Points grabs 5 Rebounds and hands out 3 Assists, in a 3/12 performance where he pulls himself out early in the 3rd Quarter.  In a blowout loss, instead of trying to play hero and save the day.

What sets me aside from other Fantasy Experts is that I am an active player in all Three Major Sports (Football/Basketball/Baseball).  I not only study stats and can tell you what any players stats are off the top of my head.  But I am a dominant force on the field/court and know what it’s like to have an Ego like these guys.  I have sometimes been a bench player, I have sometimes been the star, which allows me to experience the mindset of all these players.

Whenever I play a team that I used to play for, I want to put on a show.  Not pull myself from a knee injury where I was able to practice Tuesday and play 34+ Minutes in a Blowout Monday.

It is possible he’s more injured than he led on, regardless if you are a, “true superstar/legend” that Carmelo claims in his mind to be.  You still drop a 46 Point Game.  Even Michael Jordan at the age of 38 in his first game back against the Bulls in Chicago, he puts up a 16 Point/12 Rebound/2 Steal/2 Block game. 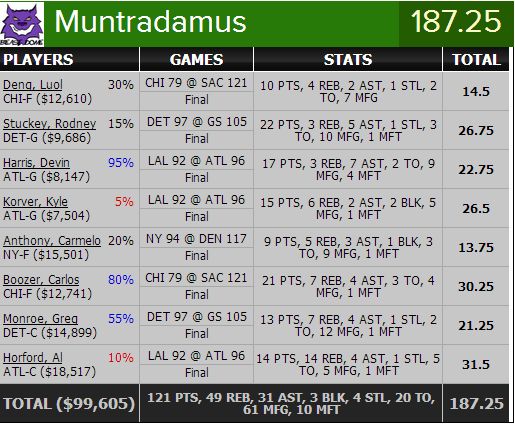 If Carmelo does anything close to that, I am playing Friday for the chance for 50K.

As in the words of Kobe Bryant after getting his ankle taken out by Dahanty Jones..

“I can’t get my mind past the fact that I’ve got to wait a year to get revenge.”

Free NBA RANKINGS through the end of the Week.   Haiku/Waiver Wire This Weekend.