There I am.  Ranked #20 of 30, which means I advance to Day 2 of my DRAFTSTREET BASKETBALL CHAMPIONSHIP RUN as 10 players were eliminated from the field.

You can see Prize information and rule by following the Link.

I’m going to be short. To sum up my day, this was was easily the most embarrassing thing I put on paper since my first days playing Daily Fantasy Basketball. 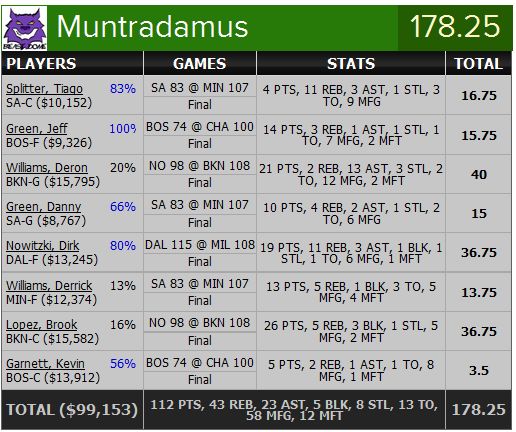 Advice of the Day.  Don’t take the injury news too seriously.  Busts like Jeff Green/Danny Green/Tiago Splitter were far away from my thought process the night before.  But because of the injury news to Paul Pierce/Tim Duncan.  I Took out Gerald Henderson (35 Points, career high) who was given to the V.I.Ps in their salary cap teams, along with other scorers that topped all three of the players combined.  I was lucky to mange 20th place.  Luckily for me, everyone else made these same rookie mistakes.

Deron Williams and Brook Lopez dominated in the end.  But my MVP Derrick Williams former UofA alum, threw down a huge 3rd quarter (8 Points/5 Rebounds/3 Blocks) which was the deciding factor as he came close enough to Al Horford who was on the 21st place team. 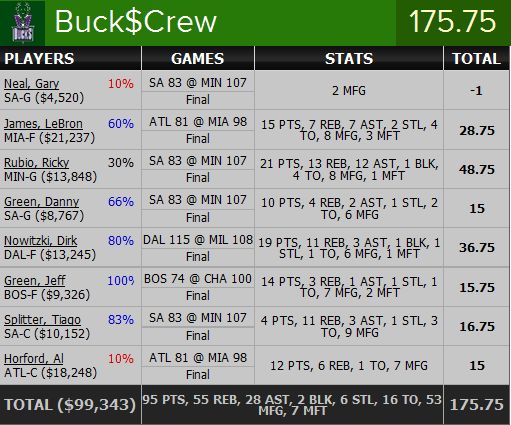 Lebron and Al Horford combining for less than 50 Points?  Thank you Fantasy Gods for the victory.